Walking is good for you! We all know it and have heard it many times. Yet, doing it out of necessity rather than on purpose and experiencing the benefits just by chance is quite another thing.

Last week, we had a performing class at Seymour Bernstein’s studio. Getting into the city by 7:30 on a Friday night can be a challenge, and the train is more reliable than the bus. So, I left the house at 5 and walked the 2 miles to the train station in South Orange. I could have taken the bus, but what’s the point of waiting at the bus station? You might as well walk.

The downside of public transport is that it doesn’t always go exactly when you need it. The upside is that this often creates breathing spaces in the pace of a day. Breathe - that’s what you need before and during a performance.

The train got to Penn Station at 6:30. That gave me an hour for the trip to the Upper West Side. Dive in into the crowd and squeeze myself into the subway, grab a cup of tea somewhere, sit down and calm my mind - or worry myself sick - or did I have enough time and energy to walk about 50 blocks?

I started walking. By the time I reached Columbus Circle most thoughts in my mind had dissolved, leaving room for nothing but the g-sharp minor Prelude from WTC II playing in my mind. In the middle of the 1st part, the melody showed a tendency to merge with the development of the 2nd part, taking the wrong turn, so to say. It didn’t pose a huge threat, since I was planning to play with the score, but it is something to check on during the next practice session. Apparently, there was something going on in the music that I wasn’t quite aware of.

Half an hour before a performance is not a good time to check on details, though. Let go of the thought, rely on the motions you have trained in your practice, and turn on the music again. Keep walking. Occasionally, the theme of the last movement from Beethoven’s op. 109 blended in, adding an interesting note to Bach’s Prelude.

The number of chairs in Seymour’s studio announced a larger audience than I had expected, something that would have sent my nerves flying on other occasions. When everybody had arrived and it was my turn to play, I found myself completely calm, feeling out the touch of the piano, adjusting as I played, my hands warm for once, finally bringing the music to life that had been playing in my mind all the way as I was walking along Central Park.

It was one of my best performances ever. It wasn’t perfect, the Prelude a little too fast and light, and I garbled up the very last passage in the Beethoven Sonata - but if there was nothing to be improved, what would you live for?

Walking is, of course, no substitute for practicing, but it could be a powerful tool to bring out the best of a good preparation.

Give it a chance, and park the car 2 miles from the performance venue next time you play.

The emotional side of it

All the people back in New Hampshire who were so kind to help me learn how to drive and get my license will be really disappointed: I’ve sold my car and ended my driving career for the time being. 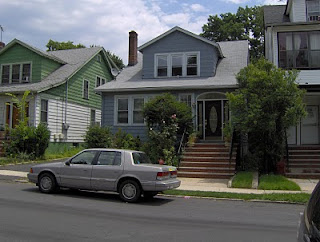 In the past 6 months I’ve driven about 20 miles, mostly between my apartment and the railroad station (4 miles round-trip) and rolling the car in and out of the driveway so that  my neighbors could get their cars out. In the end, we simply left my car at the end of the line, and I didn’t drive it for months.

There are too many roads in NJ. I can’t handle more than 3 lanes on the highway, and there are too many cars. People cut corners all the time and change their minds without signaling. Everybody drives incredibly fast, and even in New Hampshire I came to understand I that I’m a slow driver.

Driving in New Hampshire had its own challenges. When I’m driving, I don’t like to share the road with anyone, be it cars, moose, bear or deer. On the other hand, I don’t like to be in the woods by myself, either, even if I’m on the highway in the car. What if I get lost or the car breaks down in a spot where the cell phone doesn’t work?

It’s a no-win situation. Sometimes being able to drive is convenient, but I haven’t come to like it. Despite the best intentions, once I had moved to Maplewood I was back to my old and cherished transportation habits before I knew it: walk, bike, public transport, a cab every once in a while or a ride with a friend.

Wherever those means of transportation can’t take me, I don’t really need to go. If I’m honest I have to admit that I don’t want to drive.

I understand that I might be depriving myself of opportunities and I am sure that I would become a decent driver within weeks if my existence and well-being, or those of a friend, depended on it. Fortunately, that’s not the case at the moment.

By the way, the people who bought the car were also looking for a piano teacher......