Summer in the City

With temperatures reaching 95 degrees this week, we got a first taste of the summer.
Too hot to write - but don't they say a picture saves a thousand words? 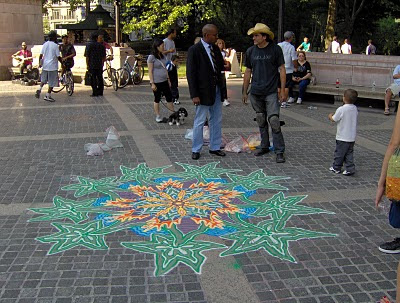 The asphalt is breaking out with flowers 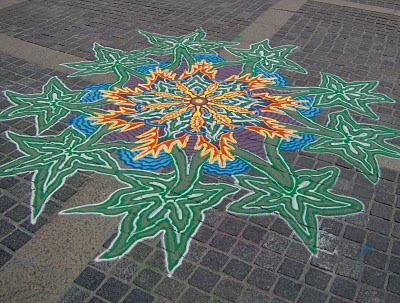 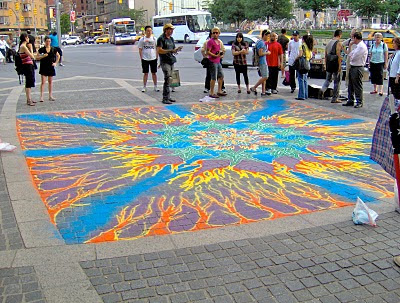 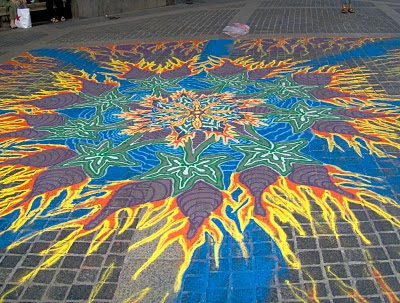 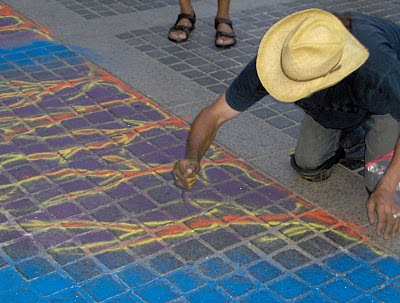 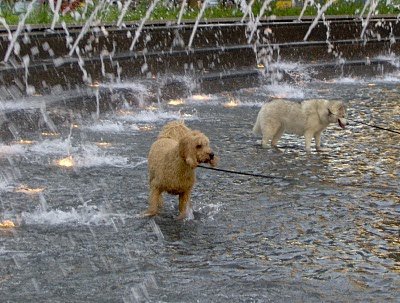 The dogs are taking a bath in the fountain 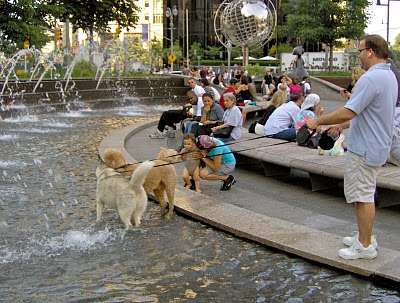 and some people think that's a great idea. 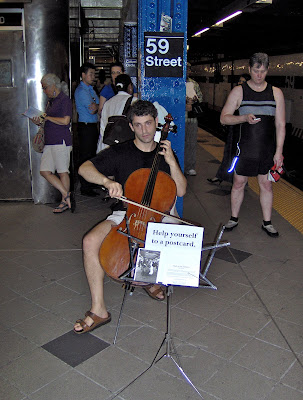 It's always great to find like-minded spirits -
Dale Henderson is promoting Bach in the subway.
The text on his postcard begins:
"Beyond a few bubbles across the country where classical music flourishes, the majority of Americans receive little or no exposure to the artform. This trend threatens the future survival of classical music.......
I perform the (Bach) Suites in the subways of New York City to sow the seeds for future generations of classical music lovers.
If you want to find out more about Dale's project, visit
www.BachInTheSubways.com
Have a wonderful weekend and stay cool!
Posted by BM at 7:49 PM No comments:

In addition to being one of the soloists with Musica Viva, my choir friend Nonie Schuster Donato has been teaching in the Music Memory Program at PS 193 in Brooklyn for almost 10 years. The program, initiated by the Riverside Symphony, teaches 3rd, 4th and 5th graders to listen to classical music. Throughout the year, the children get to know 16 classical pieces from different genres and style periods. Supported by a visual score, they learn to identify the themes and recognize them when they are played out of context. At the end of the school year, the best teams from schools throughout the city meet at NYU for a city wide competition.

“Only the kids who participate in the competition on May 13 will get to hear live music,” Nonie told me one Sunday. “They’ve listened to recordings all year, and it would be so nice if everybody could have that “live” experience - it is so far away for most of them. I’m going to ask some singers to come and we will perform some of the Madrigals. Could you possibly come in 2 weeks and play Chopin’s Revolutionary Etude for us ?”
“I’ll see what I can do, no promises,” was my first reaction. During my sabbatical 10 years ago I had gone through the piece with my teacher, Seymour Bernstein, and I had taught it once back in Germany. I had never played it anywhere near performance level. Just demonstrating part of it, seeing that left hand move on the keyboard, would be a special treat for the children, Nonie assured me, even if the piece was under tempo. Reluctantly, I agreed to come and present whatever I could come up with.
I must have made some progress during the past 10 years, and a week of intensive practicing showed encouraging results. Short sections at first, feel secure and comfortable, don’t even think about tempo. Be in the moment, and if your mind and fingers can’t handle that, chances are the practice section is too long or you’re playing too fast. Loving the piece helps, too, as I told one of my friends who asked how I was handling the challenge. Gradually, I puzzled the sections together, and, after a week, played the piece for my adult students without falling apart. During the second week, focus was more on tempo. On the radio, I happened to hear an organist play the piece and found that my left hand could go about as fast as his two feet.
Wednesday came, it was pouring, the bus to New York got stuck in traffic and when I called Nonie to say I would be late she told me I’d have to sing in the quartet, too - the alto hadn’t been able to make it. 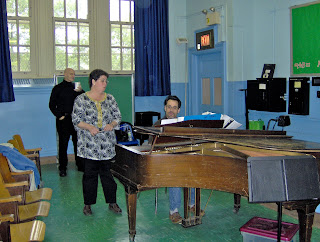 Rehearsal - Nonie Schuster Donato, Michael Fontana (at the piano), Martin Kugler
Fortunately, there was some time to rehearse before the children arrived. I’m not used to singing alto and kept getting lost between the lines. The piano had seen better days - the bass strings gave a rather hoarse and indistinct rumble, but what can you do? Put your foot on the pedal and get going. My left hand took a short break after the 2nd page turn, which makes no sense because I turn the page with my right hand, but the children didn’t mind. They listened with their mouths open, I was told later, and responded with enthusiastic applause. We all agreed that it was wonderful to perform for them, and we hope to do it again next year.

After our performance, the children had a last test run for the competition which was to take place on the next day. The team that represented PS 193 in the competition came in 2nd, with an almost perfect score. Congratulations! 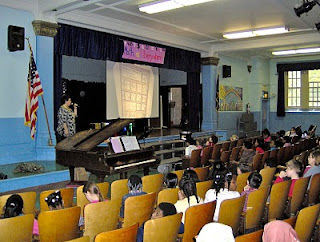 In the music memory program, the students follow the music with the help of the visual score on the screen
Posted by BM at 5:22 PM No comments:

Last week, a big box appeared on the doorstep. It wasn’t my birthday, and I wasn’t aware of having ordered anything. Somewhat puzzled, I looked at the address label, and found that it had been sent by a business that sells material related to my profession. I didn’t have time to open the package until the evening, and was greatly surprised to find a sizable gift basket with edible goodies, quality foods, inviting and quite appealing to my sweet tooth.
The only connection I was able to make between these things and my profession was that I have to feed myself in order to play the piano and teach, but it still seemed rather far fetched.
For more than 20 years, I taught at community music schools in Germany. I was employed by the community, holding a public position. Accepting anything like this would have been understood as preferential treatment and could have gotten me fired. Now, I teach privately, and could care less - except that accepting the gift just didn’t feel right.
The end of the school year is a busy time, I had a million things to do already, let alone make additional decisions. For the time being, I put the gift basket on the dresser in the bedroom - the only place where it fit without being in the way. In between tasks, tried to come up with an idea what to do with it: provide the snacks for a house concert a friend is hosting this week - give it to a homeless person at Port Authority the next time I go into the city - share it with the people from my volunteer shift at the Open Center...
Every option felt awkward, uncomfortable and somehow beside the point. Tuesday morning, I put the gift back in the box, got on my bike, made a trip to the post office, and returned the package to the sender. Thanking the business for their generosity, I explained that I simply didn’t feel comfortable accepting a personal gift from a business connection.
Posted by BM at 12:51 PM 1 comment: