Facing demons is nothing new on the way to a performance. Tapping deep into the emotional content of the music also puts me in touch with the loose ends in my current emotional life - things that don’t feel quite right, but I don’t know why; things I’m not comfortable with but have decided to live with for the time being; nightmares of the past, triggered by events in the present.
Plagued by panic attacks, meltdowns and sleepless nights I had been ready to cancel the upcoming performance at the Concord Community Music School, which had been my work place for seven years. As much as I was looking forward to reconnecting with former students, with colleagues and friends, the fact that I would be playing for them put a considerable amount of pressure on the situation. Supported by good friends, I had decided to follow through, especially after a conversation with my teacher had helped me to better understand the personal reasons behind my fears.
I had survived a tryout, but it hadn’t done much to boost my confidence. It didn’t make sense. I was well prepared, I had lived with the three Preludes and Fugues for a considerable time, I had performed the romantic music on the program only two weeks earlier at Amsterdam House. I was playing that part of the program from memory this time, but I felt secure and convinced that it was a good decision
When things are this bad, there is usually something wrong with my practicing. The thought had occurred to me before, but I had not been able to figure out what it was. I went on my Sunday morning walk, and spent some thoughts on the practicing I had done the previous week. I had tried to pay equal attention to all pieces on the program, and I had played it through every day.
Suddenly, I had an idea. The program was almost an hour playing time, and what scared me most were the three turbulent minutes of Chopin’s Revolutionary Etude. I  love the piece and had continued to work on it ever since I played it for the children at my friend’s school in the spring. Over time, I had mastered it to a point that seemed to justify a public performance, but it was something I had never done before. The concert date only a week away, it felt like reaching for a level I didn’t own yet.
Was it reasonable to put everything else aside, and spend the greater part of my practice time on the etude? The shortest piece on the program? If everything else went well, people might even forget if I screwed it up! Or should I take it off the program?
Fear isn’t reasonable, so I put everything else aside. Once more, I took the demon apart, dissected it, looked at every detail. I practiced short sections, two measures at a time, established “starting points”, played hands alone from memory, and corresponding sections back to back. I refreshed my awareness of the harmonic structure of the piece - it does make me feel better to know what key I’m playing in, and where I am on the map.
After just one practice session, my confidence got a boost. What’s the second-scariest piece on the program, I asked myself?
When I performed in Concord last Sunday, the etude still cast its shadow over the rest of the program. I had to remind myself to breathe, and my mind was hanging on to the music for dear life, trying to fend off intruding thoughts, especially the mean little voice that keeps telling me I can’t do this. Surprisingly, my hands did their job, as if they hardly noticed the struggle.
“The Chopin rocked, not because of your 'fingers', but because of your 'soul' ", wrote one of my former students enthusiastically. What do we learn from this? You’ve got to face your demons if you don’t want them to rule your life.
Posted by BM at 11:06 AM No comments:

A reason to perform

After the last writing class, our teacher Mark Matousek sent the following poem by Stephen Dunn to us:
A Secret Life
Why you need to have one
is not much more mysterious than
why you don't say what you think
at the birth of an ugly baby.
Or, you've just made love
and feel you'd rather have been
in a dark booth where your partner
was nodding, whispering yes, yes,
you're brilliant. The secret life
begins early, is kept alive
by all that's unpopular
in you, all that you know
a Baptist, say, or some other
accountant would object to.
It becomes what you'd most protect
if the government said you can protect
one thing, all else is ours.
When you write late at night
it's like a small fire
in a clearing, it's what
radiates and what can hurt
if you get too close to it.
It's why your silence is a kind of truth.
Even when you speak to your best friend,
the one who'll never betray you,
you always leave out one thing;
a secret life is that important.
--
Reading the poem made me think of performing, and how it connects to the secret world:
In a perfect world, wouldn’t you wish to find
just a few kindred spirits
with whom you could share your secret world-
or at least parts of it
without being hurt.
That’s why I perform.
Those who understand will get the message
and those who don’t,
can’t hurt me.
Posted by BM at 10:20 PM No comments:

Music or Memory IV - looking back

The last note of “Liebestraum” faded, and Natalie and I made our last bow, exactly at 3:30 last Sunday. We hadn’t timed our program of Folk Tales from the Rhineland and Romantic Piano Music exactly, and we were both a little nervous about that. But it had come out perfectly, and we were looking at a lot of applause and smiling faces, in spite of the grim spectres the stories had conjured up, as would be appropriate for Halloween . Several residents of Amsterdam House talked to us and asked us to come back; one of the visitors even summarized her impressions in the following lovely note:
“Ladies,
What a wonderful afternoon! You both work beautifully together. I’m here to visit my husband. The stories were absorbing - what a good actress - speaker you are! And the classical music so enjoyable.....
Thank you for everything. You are appreciated.”
In spite of that, I was completely exhausted after the concert. It’s not just the playing that counts, but the circumstances as well. Taking the bus at 10:30, to allow for plenty of time, in case we hit traffic on the road. Picking up some lunch on the way, then heading for the venue, to have enough time to set up, do a sound check with the microphone, get used to the piano.
Visiting a retirement home naturally means to touch base with declining health and the last stage of life. The kind of energy you sense is very different from that of a concert hall, and the perspective of an approaching performance heightens sensitivity, making the impressions even stronger.
The “Green Room” was the best ever: trees and fresh air, and what a view! 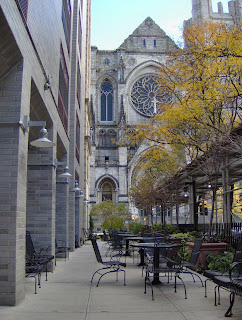 View of the Cathedral of St John the Divine from the garden at Amsterdam House
I was glad that I had visited the premises before, and tried the piano so I knew what I was getting into. I knew I would have to sit higher than I usually do - but I didn’t remember it was that high! The restless spirit of a long deceased piano tuner must have visited the venue well in advance and screwed up the lowest c- octave - the lowest note was about a fourth of a step off. I needed it repeatedly, and it added a real touch of Halloween to the sound.
Fortunately, I was ready for that.  Spending an hour trying to coax sounds out of an instrument that aren’t really there made me even more grateful for the instrument I have at home, and wonder whether the pianists who play in concert halls on beautiful concert grands appreciate the luxury they are enjoying.
Under these circumstances, I was glad to play from the score, to have something outside myself to hang on to, and it helped me to stay focussed.
And yet, the next day, it was the greatest relief to put the music away and play the repertoire from memory. It adds a touch of freedom I’ve rarely been able to achieve when playing with the score. Something shifts in my brain the moment I take my eyes off the score and look at the keyboard, with nothing to follow but the music I hear in my mind.
Posted by BM at 8:12 PM 1 comment: