Everything had started out so well. Terri Suess from the Ethical Culture Society in Maplewood had spontaneously picked up my spontaneous idea to play a benefit recital for the earthquake survivors in Haiti. We had found a suitable date. A flyer was made, and invitations went out. My tryout had been successful. The piano at ECS had been tuned, and I had had three practice sessions at the venue. The piano bench was too high, but I had taken my own bench there, and a lamp as well, so I would have enough light to read the music. I had had a confidence inspiring last practice session at home - and now, at 5:30, it was time to leave, and my music was gone!
I had looked into my backpack twice in disbelief, unpacked it and repacked it - the blue Henle score of Bach’s Well’Tempered Clavier II had disappeared mysteriously. I had used it for practice in the afternoon, even reinforced the edge of a page with tape to make the page turn easier, and I was sure I had put it in the backpack with everything else.
I began to search the apartment. There weren’t many options. Inside the piano, behind the desk and the shelf next to it, in the closet where I keep my concert clothes, it wasn’t on any of the tables. Quickly I scanned the other blue scores on the music shelf. After all I could have put it in the wrong place. Also, I kept periodically checking the backpack, hoping that this was just a bad dream - but it wasn’t. This was creepy. I began to seriously consider the possibility of sabotage by supernatural forces.
I have another edition of the Well Tempered Clavier which I occasionally use for reference, but I don’t play from it. The layout of the page is different, and I wasn’t sure whether I would be able to adjust. Time was passing, and getting in some practice with the unfamiliar score seemed a more promising option than getting on the phone and trying to find someone who could provide me with a copy of the Henle Edition at the last minute.
It took some effort to adjust, but it went well enough to take the plunge. In my hurry to get out the door I had forgotten to take an extension chord for the lamp, but they had that at ECS. My piano bench, which had been transported there by cab earlier in the day was still too high. I hadn’t realized that the piano does not stand on coasters, making it a little lower than usual. Fortunately, there were plenty of folding chairs which had just the right height.
The concert started with two Preludes and Fugues. Despite a few rough spots I secretly congratulated myself on having learnt the music well enough to be able to do this at all. The impact on my concentration was not altogether favorable, though.
I played the rest of the program from memory and there were a couple of unforeseen detours and fairly liberal interpretations of Beethoven’s score.
Also, I noticed something very disconcerting: the use of the pedal caused the chair to slide backwards. A tiny bit each time, not visible to the audience, but possibly enough to put the keyboard out of reach by the time I got to the last variation of op. 109. Finding appropriate moments to pull the chair closer added an additional challenge to a challenging piece.
It was a relief to play “Scenes of Childhood” afterwards - the short pieces allow much more of a chance for seating adjustments.
Despite these obstacles, I managed to keep going and bring the music across. The audience was very appreciative. $ 325 were donated to UNICEF and "Doctors without Borders", and after the concert we all spent pleasant time together in the hospitality of ECS.
On getting home, I wouldn’t have been surprised to find the lost score staring at me the moment I walked in the door. An upcoming performance can have a heavy impact on perception.
But the score remained lost. As I put things away I kept searching for it, scanning every flat surface, checking bags, shelves, the piano again....
The next day, when I was standing at the piano, something blue on the top of Cappuccina’s scratchpole caught my eye. When or why I put the score there, I have no idea. 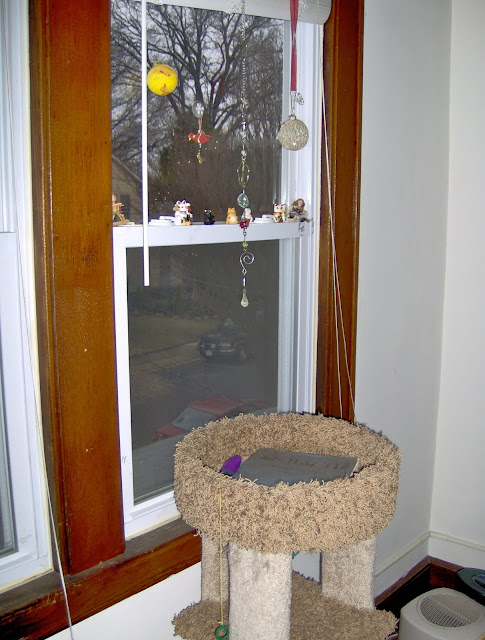 Some time ago I saw someone wearing a T-shirt with the slogan: “Don’t let your mind wander - it’s much too small to be out there by itself.” While I fully acknowledge the truth of that statement, I am still more comfortable with a mind that wanders occasionally than with a ghost in the apartment that puts jinxes on the music.
Posted by BM at 11:46 PM 1 comment: 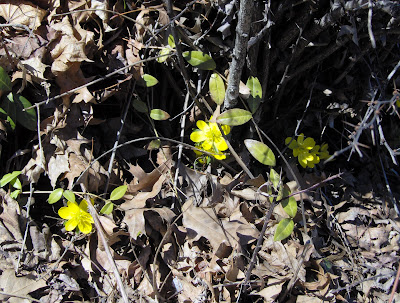 I noticed the first flowers on Sunday a week ago by the bus stop, on my way to the choir concert.
At first, I thought it was plastic someone had thrown away.
Only when I looked closer did I notice that they were real, and they were all over the place. 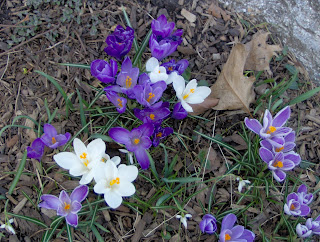 Today: Crocus in the park 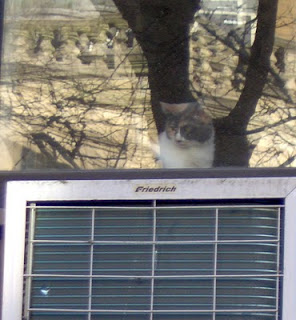 Cat, bird-watching in the window
and waiting for the air-conditioning to come on. 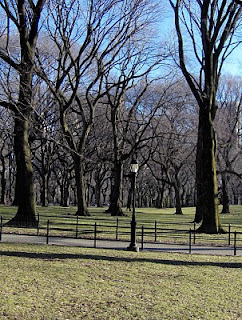 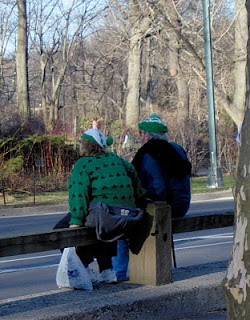 The only time I met Dorothy Payne in person was at the MTNA National Conference in Washington, DC in 2001. I knew Dorothy’s sister, Rebecca Shockley, and we had planned to get together at the conference. That’s where Rebecca introduced us. We had a brief conversation, about music theory, about the theory classes I had had in college.
As a music education major, I had to take a lot of theory - harmony, counterpoint, ear training and more. Memorizing all these terms and trying to find whatever they signified on the keyboard and in musical scores was quite a challenge for me. It had to do a lot with thinking, rather than feeling music.
Dorothy Payne' s presentation at the conference was the best theory lesson I’ve ever had. She divided the audience into sections, and we sang. Scales, intervals, patterns, chords, as she directed us. Under her guidance we experienced music theory as a system of names for sounds, sounds of different colors and different emotions.  I think if I had had the chance to study music theory with Dorothy, the subject could have become the key to unlock the secrets of the world of sound, rather than an intellectual obstacle course.
Some time later I found out that a colleague of mine in Germany had had theory classes with Dorothy Payne at the Eastman School of Music. My colleague said that those classes had  helped her understanding of music tremendously, and she remembered them with great fondness. That’s not something you hear from piano majors very often.
There were a couple of summers when I wasn’t working on any major projects and had always wanted to ask Rebecca whether her sister taught any classes outside of college that were open to teachers or the general public. But something always got in the way, and I never asked.
I learnt from Rebecca that Dorothy retired, and then, that she was diagnosed with Parkinson’s disease. She passed away last Thursday, March 11, in Cincinnati.
I will never forget her presentation at the conference. It changed my way of understanding music theory. Some people leave a trace in your life even though you’ve only met them once.
Posted by BM at 11:13 PM 1 comment:

There was a time when performing from memory scared me to death. I’m still not a person who “memorizes naturally”, but I’ve found a way to do it that works for me, and I feel comfortable with it.
Having “Starting points” throughout the piece plays a major role in the system. Having to start over from the beginning if something throws you off ( and possibly getting stuck at the same place again) is a nightmare you don’t want to live through on stage. If you can start at your starting points in random order, you really know the piece- that’s what I always assumed and aimed for.
Of course, you need to practice that, and it’s time consuming, but it’s also a way to explore the underlying structure of a piece. For me, it is a kind of “practical analysis”, and I also use it to draw “maps” and structural outlines of pieces. (For ideas on "maps" of pieces, check out "Mapping Music" by Rebecca Shockley)
While this works for me, it doesn’t necessarily work for everybody. I learnt that recently at a seminar on memorization. Apparently, it can be very confusing for people who do not have visual memory and rely on their hearing only. I can well imagine that it is much easier to get lost if you don’t have the image of the score or a “map” in front of your mind’s eye.
There were a lot of inspiring ideas, but when I went back to my practice routine at home, I suddenly realized that my next recital is only three weeks away. I have tryouts before that, and there’s still work to do. This may not be the best time to change a plan that’s served me well so far.
Somehow, exchanging ideas about memorization with other people had conjured up demons. Things started to happen that have never happened before, just because someone else had talked about them - losing your hearing while you play. Verbal thoughts intruding - I’ve had my share of that, and I can let go of them if I focus on my hearing, but “Story Lines” ( a story you make up to help you remember the music) don’t work for me. To tell the truth, they drive me nuts.
I’ve had students, though, who found them helpful. Emily Marsh, my former student in Concord once invented a story to help her remember a Ragtime, and she even drew a delightful cartoon to go with it.
I don’t find it so difficult to remember the sequence of the piece, but I can’t always trust my motor memory. Occasionally, I forget motions - I can hear the music in my mind and I know exactly where I am, but my hands have forgotten what to do. For this reason, I need special awareness of everything my hands are doing, learn hand divisions, the feeling of motions, the hand positions of chords.
I also have a history of forgotten endings - of phrases as well as of pieces. That’s why I start learning and memorizing a piece in small sections from the end. It probably doesn’t work for everybody.
The one thing everybody seems to agree upon is that having starting points throughout the piece is very useful, unless you have every reason to trust that you always play perfectly.  Since you can’t rely on anything on stage that you haven’t practiced before, you have to PRACTICE starting at your starting points. I have found that many students are not aware of this. They think it’s enough to KNOW where the starting points are, but KNOWING is mental, and PLAYING is physical - occasionally, I tend to forget that myself. By the way, you also need starting points when you play with the music.
Beyond starting points, it seems to me that memorizing is a highly individual process. In my opinion, you have to experiment and rely on whatever works for you. Who is to say that in order to prove that you have learnt your piece perfectly you have to be able to write it down from memory, play it on the tabletop or see every note on the page in your mind’s eye?  The fact that some highly skilled and gifted musicians can actually do that does not imply that it is the ultimate and only way to memorize.
Posted by BM at 9:32 PM 1 comment: