"I could never do that" - be careful what you say.

Last month, a student from Columbia High School contacted me, asking for piano lessons. He was preparing for a special project: If he managed to learn the first movement of  Mozart's Piano Concerto No 17 in B-flat major, he would get the chance to play it with the Youth Orchestra - provided he could play it well enough.
Miles has been playing the piano for about 2 years, and he’s basically self-taught. For some time, the choir director at school had worked with him, but he had gone on leave, and now Miles was left without a teacher. He didn’t have a good piano at home and always practiced at school. We met to see if we could work together, and I was impressed.
Then, Miles told me the date of the concert: May 1st,  2010 - just 6 weeks away. “I could never do that,” I thought. I’m a slow learner, and if I don’t have my program down, memorized and ready to roll a month before the performance, my brain freezes in panic, preventing me from taking in any information at all.
“I could never do that...” that’s what a writing teacher once told me when I explained that I don’t always write in chronological order, but sometimes picture different scenes at different points of the story and work on them individually. As a novice writer, I found the reaction very discouraging, possibly suggesting that I was doing something wrong or at least unprofessional.
“I could never do that,” said an expert on memorization, when I explained that I practice “starting points” in random order and advise my students to do the same. I started to question my own experience and wonder whether I was imposing trauma on my students.
When I accompanied students at competitions, I’ve occasionally seen well-meaning parents sabotage their children, saying “I could never do that” minutes before the performance.
All of that in mind, I swallowed the remark, and decided to see what would happen. Miles threw himself into the project with great enthusiasm. Yet, progress was slow at first - 2 pages a week, maybe 3. “And then you have to develop the stamina to pull it all together and hold up against the orchestra,” I thought. Spring vacation came along, 3 weeks to go. I suggested to modify the goal. Bring the piece far enough to play a rehearsal, and making the final decision would not be his responsibility anyway.
After vacation, Miles played the entire piece. We worked on the cadenza. When he came this week, he had already played with the orchestra, and the director had decided that he will be playing in the performance.
“I could never do that.” I don’t think I could, but to tell the truth, I’ve never tried. I just have many years of experience, performing myself and watching others perform. When I was Miles‘ age, I didn’t try to learn a movement of a Mozart Concerto in 6 weeks and perform it, but I did a couple of other things that the adults in my life thought rather daring, if not to say impossible.  It’s still great to see determination, focus, hard work and  youthful enthusiasm win over doubts based on experience. Congratulations, Miles, and good luck for the concert.
The concert with the Northern New Jersey Youth Orchestra will take place next Saturday, May 1st at 2pm  at the Notre Dame Church   in North Caldwell NJ  359 Central Avenue, North Caldwell NJ 07006.
Posted by BM at 9:08 PM No comments:

The Future of the NYC Marathon

The New York Road Runners are a common sight in Central Park on Sunday mornings. Last week, however, the youngest members got their chance: 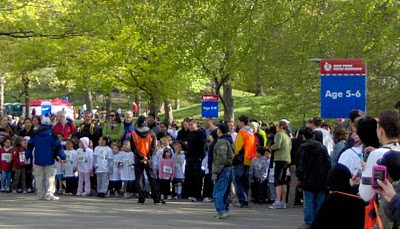 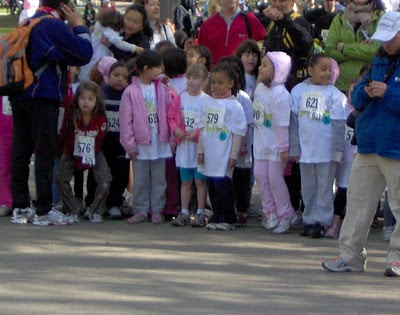 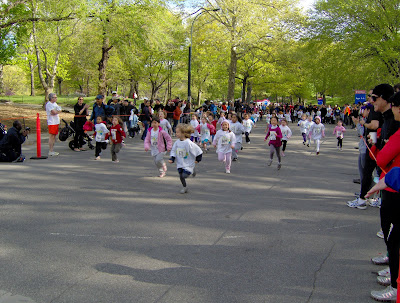 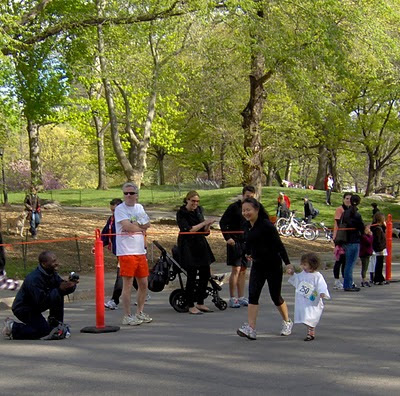 The most precious moments of making music
are not the ones when you finally master the passage,
understand the form of the piece and
the intention of the composer.
The most precious experience of making music
is not a successful performance,
but the quiet moments alone in the practice room,
when the sorrow expressed in the music
connects to your own silent grief,
finally allowing the tears to flow.
Posted by BM at 2:45 PM 1 comment:

Email ThisBlogThis!Share to TwitterShare to FacebookShare to Pinterest
Labels: music as life support

The other side of spring 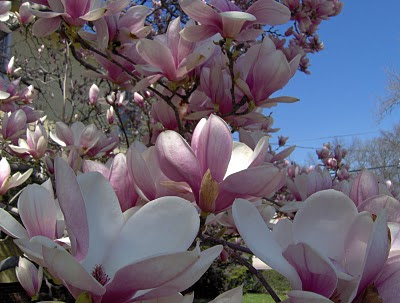 In all its beauty, spring is the most unsettling time of the year.
There is the sudden burst of colors, changes every day,
and you don’t know where it may lead to. 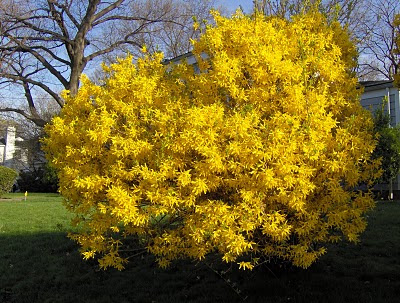 As the light gets brighter, the shadows grow longer. 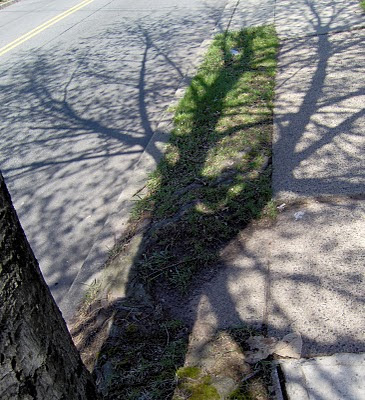 In order to see the new life, you have to look down at the earth. 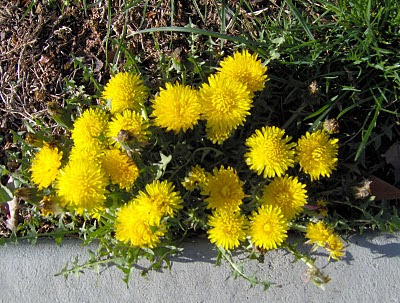 You may find blossoms where you don’t expect them. 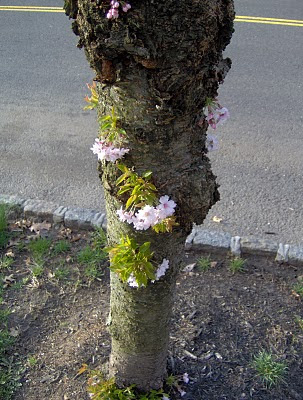 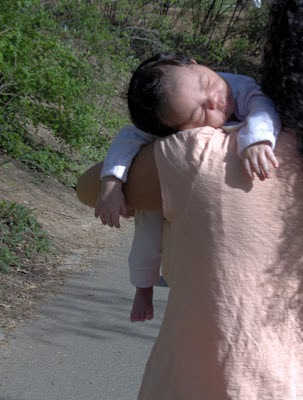 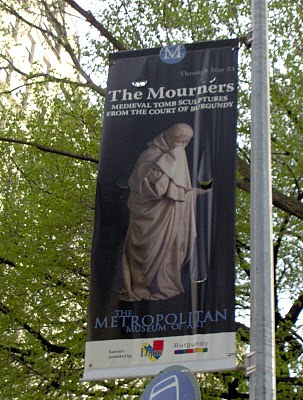 People die, even though it is spring.
Life and death never seem closer together.
Posted by BM at 2:37 PM No comments:

The Magic of Names

My first job as a volunteer at the Open Center in New York City consisted of helping with  a large mail campaign. The fund raiser asks people who have taken classes at the center to donate money to help the institution cover its costs.
Several thousand envelopes have to be stuffed with several items: a letter to the addressee, a form for the donation, a return envelope etc.
Step no 1: Take an envelope with the name and address out of one box,
Step no 2: Find the matching letter in a different box,
Step no 3: Find the donation form in a stack of papers arranged in alphabetical order,
Step no 4: Put it all together, seal the envelope and put it in the mailing container.
English names, German names, French names, Spanish names, Scandinavian names, Jewish names, names from countries in Asia, Africa, Eastern Europe....
Most of the addresses were located in or around the city.
As I was assembling the mailings, the names began to conjure up images in my mind, images of people and places - the entire world, contained in a stack of papers in an office in New York City.
Posted by BM at 9:10 AM No comments: 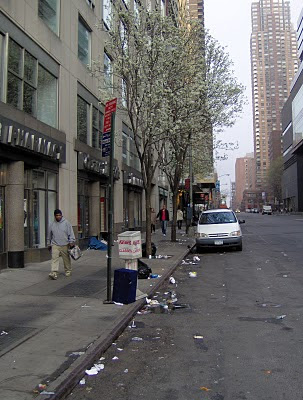 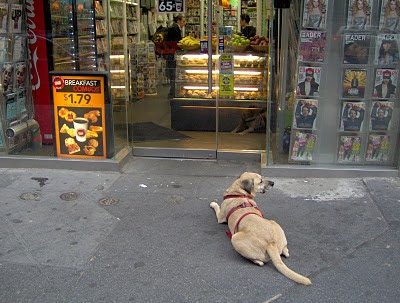 Where is my breakfast combo? 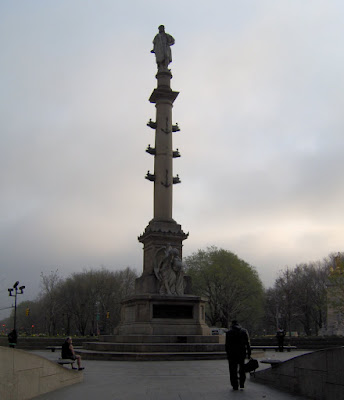 Columbus, looking for the rising sun... 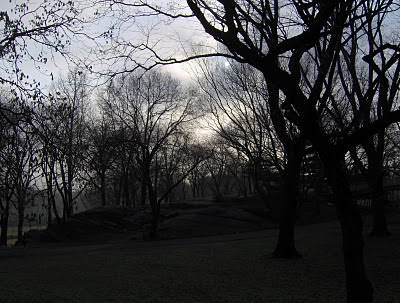 ... which was still a bit weak at 8 in the morning 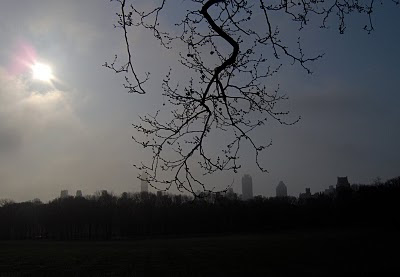 This was as good as it got. 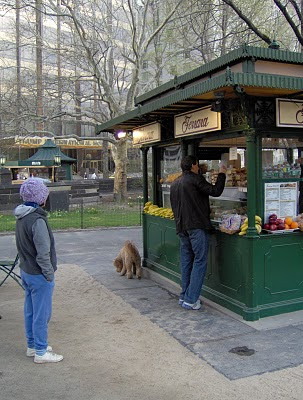 No Easter Eggs at the coffee stand, but plenty of bananas. 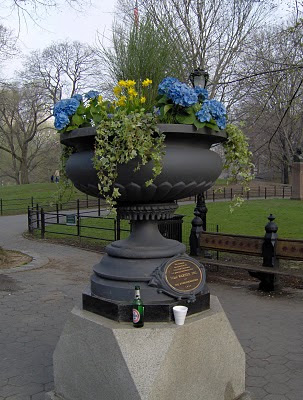 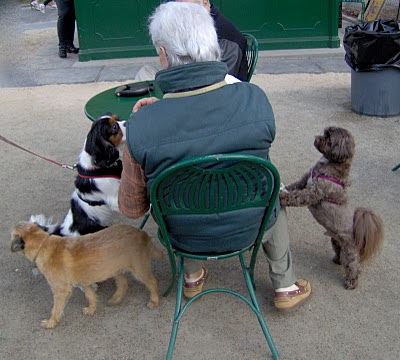 In difference to Goethe's "Faust", NO black poodles, 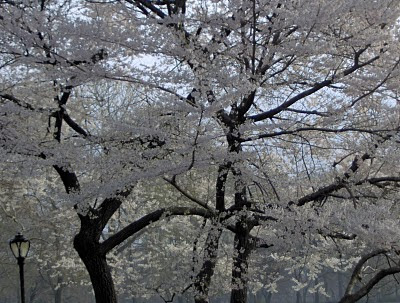 but many blossoms.
Happy Easter, and have a wonderful spring!
Posted by BM at 10:35 PM 2 comments: