When WQXR - New York’s radio station for classical music - announced a Beethoven Sonata Marathon at the Brooklyn Academy of music to be held on May 9th I was glad that the gig had fallen through I was supposed to play on that day. It meant no fee, of course, but memorial services can be a bit heavy on the spirit. I couldn’t imagine a better way to celebrate life than listen to all 32 of Beethoven’s piano Sonatas. Confidently, I bought the all-day pass.

On the day of the event a long line of listeners has already assembled in the lobby when I arrive at BAM (Brooklyn Academy of Music) shortly before 10 am. The contents of the “goodie bag” I’m given is a nice addition to the sandwiches I’ve brought to last me through the day: banana, crackers, energy bar, chocolate and water. It is reserved exclusively for those who plan to sit through the entire event. I pick up my all-day pass and tickets and join the line.

Since I committed a few weeks ago, I’ve had second thoughts. In 2011, I attended the greater part of WQXR’s first marathon of Beethoven’s piano sonatas at the Greene Space in Manhattan. Jeremy Denk was the discovery of the day. He played the Hammerklavier Sonata and the last one, No 32 op 111 in c-minor.  I’ll never forget the intensity of that impression, and I couldn’t imagine that anyone or anything could top that. Trying to repeat an experience often leads to disappointment.

I could be home, practicing, and maybe I should.  I have another gig to play, the performance is in two days. I comfort myself that I can always leave if my nagging conscience gets the upper hand. That’s the last I think of the gig, before the elevator takes us up to the concert hall on the fourth floor.

We enter a plain chamber music hall with rising rows of seats. A concert grand with the lid raised stands in the front of a row of large windows. There is no stage. No TV screens either, to show close-ups of the performer’s hands on the keyboard. Semi-transparent screens shield us from the view of the outside world, and the shadow of a construction crane suggests that we aren’t missing out on anything. There are no classrooms on the floor, no “traffic” from students attending lessons or waiting parents. There’s only the audience who has come to hear the marathon, the performers and the staff. It feels a little bit like being on top of a lighthouse. For the next 13 hours, it will be just us and Beethoven’s music.

The Sonatas aren’t presented in chronological order. Instead, each of the six recitals (click the link for the program)  contains works from different periods of the composer’s life, giving an overview of his entire creative process for those who can’t stay the whole time.

Sonata no 1 in F-minor, op 2, no 1 opens the program. It’s often the first “real” Beethoven-Sonata piano students lay their hands on. It was my first, in college, or maybe still in High School – I was not a very advanced player back then. The emotional intensity of the music fascinated me. This was the most serious stuff I’d played so far. It was also my first experience of Beethoven Sonatas getting harder the longer you practice them. Tension builds up over long stretches of the way. Keeping the tempo and sustaining the energy was a challenge for me. Stephen Beck’s interpretation touches me as transparent and classical in style, Haydn or Mozart shining through.

I haven’t played the second Sonata on the program, No 12 in A-flat major op 26, but I know it well, and it is one of my favorites. You can hear the opening theme of the late Sonata op 110 shine through the theme of the variations. It has some of that same warmth and longing. My college friend Gudrun prepared op 26 for finals, and I heard it every other day when she and I got together to play for each other in the weeks leading up to the exam. She is a rather outgoing person and hated the third movement, the funeral march.

After I got my college degree I worked on the sonata with Markus, one of my first piano students. He eventually prepared it for college auditions. I was quite nervous about “doing things right” with Beethoven, and anxious how my suggestions would hold up in front of the jury.

Gloria Chien’s warm and sensitive interpretation of the Sonata speaks to me, and so does Ran Dank’s outgoing, expressive and exuberant performance of op 31 No 2, “The Tempest.” An image rises up in my mind to the sounds: Oxana Yablonskaya, with whom I was studying at the time, playing the sonata at a concert in Germany. Selected readings from Thomas Mann were inserted between the movements. I found them distracting. But then, this was thirty years ago, at a time when everything sounded like a blur, compared to what I hear now. It’s amazing how your state of mind and experience are part of your perception.

During one of the intermissions I find myself taking stock of the Sonatas I have played. Op 2 no 1 was followed by op 10 No 1. I seriously considered dropping out of college over the challenge of figuring out the rhythm of the second movement. My college professor suggested op 10 No 2, and the last movement went over the edge more often than not when I played it. Then, I persuaded him to let me play op 27 No 2, the “Moonlight Sonata.” He didn’t think I’d master the turmoil of the last movement, but my love for the piece expanded the possibilities of my technique. Years later, I had a similar experience with a teenage student, who had started to learn the piece by herself over the summer.

In all, my encounter with Beethoven sonatas as a college student wasn’t a big success. They always brought me to the verge of my technical abilities, and I had a hard time puzzling together the conflicting emotions. My parents gave me the recording by Alfred Brendel. It was the only one I knew. His somewhat distanced, intellectual interpretation did nothing to bring them closer to my heart.

After college I began to attend master classes. That opened a whole new world. Beethoven Sonatas will forever be connected with the memory of the late Jürgen Uhde, whose books on Beethoven’s piano music I still consult when I play or teach them. The university in Weingarten, Germany became a sanctuary of music at Easter and in the summer. Like–minded people came together to explore the truth behind the notes of the score under the guidance of the master. I find myself listening for some of Uhde’s suggestions: keeping the basic pace, “Tempoachse,” ( the underlying feeling of a continuous pace) as he called it, throughout a set of variations of different character, and I check whether the beginning of the Waldstein Sonata feels as if the ground is starting to shake.

I began to discover the late sonatas in Uhde’s courses, but it would take another twenty-five years until I dared to learn them myself under the guidance of Seymour Bernstein, and perform them eventually.

I look around and wonder what’s going through the minds of the other audience members as they listen to the music. “He played the Moonlight Sonata as if he was in a hurry to catch the train,” someone says. I would put it a little more gently, but I also felt that it was too fast, and too straightforward, lacking space and breath.  I wonder whether the pianist was afraid of appearing sentimental…

What is supposed to go through our minds when we listen to music? Intellectual recognition of form and structure, as music appreciation classes in high school seemed to suggest? As the order of the program takes us through all stages of Beethoven’s creative process time after time throughout the day it strikes me how the spirit of the late Sonatas occasionally flashes up in early works.

On the side, I notice things I point out to my piano students when I teach. Traditionally, the recapitulation of a sonata form rounds things up, conveys a feeling of resolve and reconciliation. Beethoven makes it part of a development that never stops. It’s one process going through from the beginning to the end. I don’t think about this as I listen. It just comes to my attention – and it probably wouldn’t if I didn’t know.

Are we supposed to judge the interpretation and the skills of the pianist? When something rubs me the wrong way, I often distance myself and search for reasons. They are usually much easier to describe than the impression of a perfect performance that connects the composer, the pianist and the listener, because it strikes a chord in our hearts, and appeals to something we all share.

Throughout the day, the sounds blend with images, feelings and memories.  What takes up half a page when you put it into words, appears like a flash in my mind in reality; pictures, the reminiscence of emotions, evoked by the music. They bring a moment of the past to the present, and the impressions merge. I’m not daydreaming; I’m listening. I’ve brought the score and follow it, mostly for the pieces I don’t know so well. I hear and feel music, that’s all, almost as if I were practicing.

Late at night, a group of intrepid audience members, who’ve stuck it out until the end, heads home on the subway. Beethoven’s music brought us together for a day, now we return to different destinations. “After a while, you didn’t hear individual pianists, you just heard Beethoven’s music,” somebody says. Stewart Goodyear, one of the pianists who performed in the marathon, is traveling with us.

“That’s the way it’s supposed to be,” he says. I remember his performances of op 10 No 3 and op 22 for their technical brilliance, power of expression and musical presence. Goodyear has played the entire sonata cycle by himself, in a ”sonatathon” a one-day event, interrupted only by a one-hour break for lunch and dinner.

Someone speaks out what we all think: “How in all the world can you do it?” “You have to live with the sonatas until they become part of you,” he replies.

Some of that happened to us today, I think as I board the midnight bus to New Jersey. Daria Rabotkina’s op 111 still resounds in my mind. It’s amazing what you hear when you’ve played the piece yourself and know every note. I loved the “feminine touch” she gave the piece, a certain softness, roundedness of the sound, a sensitivity that shaped the “stardust” of the fourth variation into a continuous string of melodies.

The marathon was a journey to a different place. We left the world behind to look at it from a different point of view.  Some of that remains as you go back to every day life, just as you remember a look at the starlit sky after daybreak. 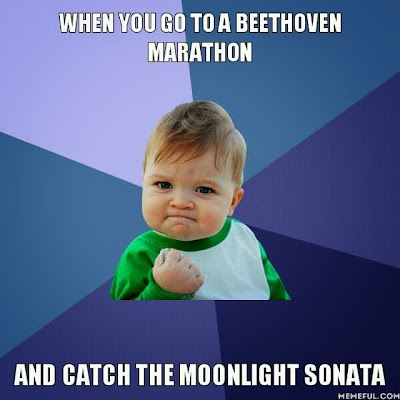