Music or Memory II - a Message from the Composer

First of all, I have to make a confession: Once I’ve memorized a piece, I don’t always follow the advice of people who are wiser than I am, and stay in touch with the score. I mainly use the score to learn the piece, but once that’s done, it tends to get in my way. I get easily distracted by the part of the music that is “playing instructions”, or by comments that I’ve written into the score, and find it much easier to focus on the sound looking at the keyboard and listening to the music in my mind.
Of course, I have the music on the music stand when I practice - most of the time -, and I refer to it to verify details when I need to, but I hardly ever “read” the entire piece. Now, the decision to play the upcoming “Halloween Program” with the music requires me to do just that.
A week into the project, I’ve made an interesting discovery: The score is inviting me to experiment - with the polyphony in Schumann’s music, for example, trying out different ways to voice a theme, sometimes doing it differently each time I play the piece. I take more time with rubatos than I would dare, if I were relying on my memory alone. It’s almost like a fresh start. Of course, I also found the inevitable wrong notes...
I am beginning to realize that my playing from memory was “memory” in the literal sense - something from the past, that I relied on every time I played the piece. Going back to the score puts me back in touch with the composer, and I’m getting some interesting new ideas.
Posted by BM at 8:24 PM No comments:

After a little break on the blog during the last weeks of summer, the school year is up and running, and the next performance is on the horizon.
Last year, when I moved to Maplewood, I made a couple of calls in search of opportunities to play. Amsterdam House, a nursing home in NYC provides many musical programs for its residents. I had played there before, and they had one performance date open: Sunday, October 31st, Halloween. Figuring that I had a year to come up with an idea for a program that would fit the occasion, I took the date.
The program will feature piano music by Schumann, Chopin and Liszt, and a selection of Hero Tales and Legends from the Rhineland, where I grew up. The tales are rather grim: people selling their souls to the devil, dancing skeletons, knights disappearing on the crusades and lonely maidens left behind. What else is to be expected on Halloween?
In the 19th century, when the music was written, people felt very much attracted by the dark and eerie, and tales like the ones I chose inspired composers to write music.
I find it hard to split concentration between speaking and playing. So, I’m glad my friend Natalie Lebert, who is an actress, will do the reading. The question left for me to decide was whether to play with the music, or from memory.
Playing for people who are struggling with health issues or dementia can be quite different from playing in a regular concert setting. There may be some coming and going during the program. It is possible that people react to the music physically or hum along.
The last time Natalie and I performed there, an old lady in a wheelchair next to the piano kept tapping her foot in rhythm to the music. Her caretaker told me later that she was going to be 102 years old the next month. I thought it was great that she was at the concert and reacting to the music, but I’m not sure my memory will hold up with ad libitum participation from audience members.
While I have not been able to train my cat to turn pages, Cappuccina takes it on herself to provide distraction here at home, so that I can test my ability to stay focussed. Can I keep playing while my mind wonders whether she has just shut off the recording machine when she jumped on it, or whether she is sitting on the microphone? 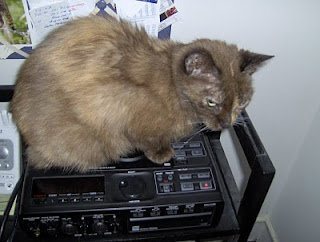 Can I play the Revolutionary Etude with a cat on my lap? The results were not too convincing, and finally, I decided to save myself a great deal of performance anxiety and put the music up on the music stand. 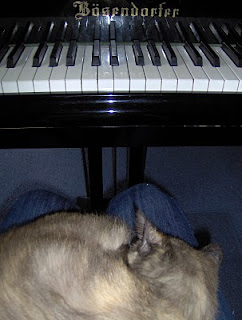 Playing this kind of music with the score has its own challenges. It was clearly composed with the keyboard in mind, and watching your hands while moving through fast passages and suicide leaps feels more secure. If you play with the score, you have to exactly know where you look at your hands and where you look at the music.
“Oh, I’ll just put up the music for the performance”, inexperienced students often say. It is one of the most dangerous traps to fall into. Not accustomed to finding their way around the keyboard without looking at their hands, they’ll take their eyes off the music, only to find that they’ve lost their place on the page when they look up again. Often enough, that’s the moment where everything stops - the worst nightmare of every performer.
Frankly speaking, I find it much more comforting to look at the keyboard, while I play, at black and white keys that always remain the same, than at a page crammed with notes and full of sharps, flats, double sharps, double flats and natural signs. Not only were the romantic composers drawn to the dark and eerie, they were also very much attracted by the keys with many flats and sharps, chromatic passages and every possible way to move around the circle of 5ths.
Of course, you don’t “read” the music, when you play with the score, at least not in the sense of figuring out what you have to play. You hopefully know that by the time of the performance, and the score only serves as a visual support. Nevertheless, I’ve often noticed that my brain has a tendency to fall back into “decoding” mode under the pressure of a performance, asking questions like “Is that a black key, or a white key?” while I’m playing - and the only way out of that is to know the answer to the question.
I’m glad I have a couple of weeks to work on it.
Posted by BM at 4:05 PM No comments: