Twenty years ago, everybody was excited, and also a little scared, regarding the beginning of the new millennium.  Musicians had yet another reason to celebrate: July 28th 2000 marked the 250th anniversary of Johann Sebastian Bach’s death. One of the many special concerts and projects in honor of the occasion inspired my own journey through the 48 Preludes and Fugues of his Well-Tempered Clavier.

“Bach - on the threshold of hope” was the title pianist Sean Duggan gave a concert series he held in New York City in the spring of 2000. Over a period of five weeks, he performed all of Bach’s major keyboard works in 15 concerts.  Duggan, a Benedictine monk and two-time winner of the International Bach Competition in Washington, DC, describes his motivation for the concert series as follows:
"The present performer justifies his endeavor as an attempt to draw attention musically to the spiritual import of the turning of the millennium, and to celebrate by means of some of the greatest music ever written the hope and opportunity which the new millennium brings."


Hope, possibility, confidence, courage, direction, persistence – I could feel it in the music. I needed it, more than ever, to take on the task I saw before me: quit my job in Germany that granted me tenure, three months of paid vacation, paid sick leave, full health- and retirement benefits, and start to look for a job in the US that would provide me with a visa and just enough money to survive and afford my piano lessons with Seymour Bernstein in New York.

Three years earlier - after a search that lasted almost twenty - I finally found in him the teacher who could teach me everything I was lacking as a pianist. I started to study with him, “commuting” from Germany two, three times a year. The lessons changed everything – but they only took me so far.

In the winter of 1999/2000 I took a sabbatical to study full time with Seymour in New York; one lesson a week and no other obligations to keep me from practicing. At the time of Duggan’s concert series my sabbatical was almost over and I had to admit to myself that I’d barely scratched the surface of everything I wanted to know and needed to learn. I knew what I wanted to do – the challenge was to build the courage.

Bach’s music brought my inner world back into balance, when it threatened to spin out of orbit. I was working on the last Prelude and Fugue from WTC 1. It took me almost a year to learn the fugue, the longest one, also one of the hardest. The music seemed to mirror my struggle. It gave me the feeling that someone else had been on that path before and eventually, mastered it. Once I had mastered the fugue I felt the need for more. One learnt, twenty-three to go to complete Book 1 of the Well-Tempered Clavier. The beginning of a journey.

I applied, when I got word that the Concord Community Music School in New Hampshire was looking for a full-time faculty member for piano. I got the job, and the promise that the school would sponsor me for a Green Card, if things worked out. Concord NH was not the place of my dreams, but compared to Cologne, Germany it was in the vicinity of New York City and piano lessons with Seymour Bernstein.

The job turned out well. The school supported the concept of the “artist-teacher,” and playing my debut as a soloist in the faculty concert series boosted my confidence. Outside of the music, I was homesick for New York, my teacher and my friends for just about every minute of the seven years I spent in New Hampshire.

The Well-Tempered Clavier became my lifesaver while my Green Card application was pending. Requirements of the INS increased my teaching load to a degree that threatened practicing and performing. At first I was desperate. Then, I had an idea. If Sean Duggan performed all of Bach’s major keyboard works, could I attempt a complete performance of WTC 1?

Fortunately I had already learnt most of the pieces before my teaching ordeal began. The challenge was to play all 24 Preludes and Fugues in one recital. I grouped them together, gradually extending, building concentration, confidence and stamina – I imagine it’s what you do when you train for a marathon. The task gave me a goal outside of teaching up to 50 students a week. That was the most important thing.

There’s no telling how long it takes for a Green Card to get approved. One of my friends was into his 7th year and his 3rd lawyer. At the end of first school year after my application had been submitted, I played a first run-through the entire book 1 of the WTC at Seymour Bernstein’s studio in New York. On my return to Concord, a message from my lawyer awaited me that was nothing short of a miracle: Congratulations, your Green Card has been approved.
Book 2 of the WTC became my emotional anchor in the transition from being employed at CCMS to becoming an independent teacher and freelance musician in the Greater NYC area 10 years ago. All my life, I’d taught at schools. This was the ultimate challenge to self-reliance and the adventure was happening in a foreign country.

I didn’t take the plunge all at once. With the help of friends and colleagues, I found a handful of students in Maplewood and a room with a piano at the de Hart center, which the city rented to me for a small fee. Every weekend, I commuted from Concord for one afternoon of teaching these students.  On the way back on the bus, when that familiar feeling of homesickness on leaving the city already lingered by the highway like a familiar commuter, I listened to the WTC 2. After a while, certain pieces associated automatically with certain landmarks on the road.

My little studio in Maplewood survived through an entire school year and started to grow. When I found an apartment where I was allowed to practice and teach, I took that as a good enough omen to relocate. I also began to learn Book 2 of the WTC and presented it in a series of mini concerts and a complete performance at the Ethical Culture Society here in Maplewood in the spring of 2013.

I’ve stayed with the Preludes and Fugues ever since. They’re at the beginning of my day at the piano,and I feel fortunate and privileged to have such a spiritual resource in my life.

Twenty years into the new millennium, the struggle for justice, human rights and the preservation of the planet has become more urgent than ever. As we near the elections, it will take even more of our energy. I can’t vote, because don’t have citizenship in this country. What I can do is share the spiritual resource of Bach’s music with others. 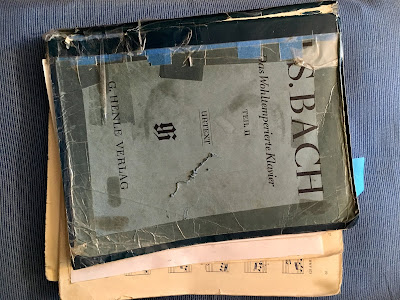 Once a month throughout the coming year, I will present a “guided tour” through two Preludes and Fugues at the Ethical Culture Society of Essex County here in Maplewood. In the course of the project we will cover all 24 Preludes and Fugues of Book 1, beginning with an introduction on September 15, 2019 and ending with a performance of the entire book on September 11, 2020.

I’m not advocating escapism – withdrawing into yourself and letting the world run its course. Instead, I hope to create a space where people can take a break, refuel and be inspired through Bach’s music. The compositional technique of counterpoint, which he mastered like no other composer before and after, represents in music what we encounter in life: a network where everything hangs together. What happens in one voice has an impact on the entire system of independent, but not self-sufficient voices that share responsibilities in the common task of keeping the whole in balance.

For me personally, this project is a gesture of gratitude – for being alive, for all I have learnt on my path, for having a roof over my head, food on the table, music and wonderful people in my life. I don’t request financial compensation for the project, but to honor the effort, I suggest a $ 10 donation for each listening session, $ 25 for the concert, to benefit the Ethical Culture Society and the Interfaith Hospitality Network of Essex County (IHN). Nobody will be turned away if that is too much, and admission for students to all events is free.
For dates of the monthly events and further information, please visit the website of the Ethical Culture Society of Essex County: http://www.essexethical.org