This morning, I played some "Bach for breakfast" at Columbus Circle. I played for about half an hour, and it was fun, although Bach occasionally had to compete with a construction site nearby. 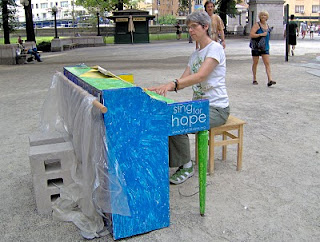 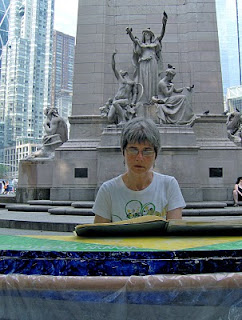 A young woman and her little boy listened the whole time. After I finished, we had a conversation. They were from Brasil, and the woman said the piano looked like the Brasilian Flag. Gabriel, the little boy, (2 years old) showed some inclination to play. We helped him climb the piano chair, and he had the time of his life. My music was still on the music stand, and after he had played for a while, he insisted I turn the page, as he had seen me do before. I think he found out what he wants to spend his life with.... 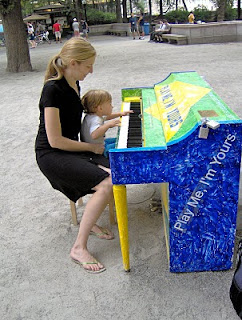 Summer is here - and the pianos are loose!

Summer is here - and the pianos are loose! I didn’t know that, until the young man sitting next to me on the train last Saturday told me about it. 60 pianos would be distributed all over the city, for people to play as they pleased.
It seemed a little hard to believe.  Maybe I had misunderstood - or had he been pulling my leg? We had both had a full day, I was returning from the annual choir party in East Hampton, and he was coming back from a 66 mile bike ride.
On Monday, the newsletter from the Third Street Music School  confirmed that it was true. Luke Jerram, a British artist, got people to donate their old pianos, which are now distributed all over the city for people to play from 9 am to 10 pm until July 5. After that, they will be donated to institutions all over the country.
A map showing the locations of the pianos is available on the Internet, http://www.streetpianos.com/nyc2010/  On Monday, on the way to my volunteer shift at the Open Center, I checked out the one at the Bryant Park Library. It can still do some background percussion for a rock band, but that’s about it. The one at Macy’s is a better choice, but it didn’t have a bench, and the garden chair I had to use brought the keyboard up to about shoulder level. Regardless of that, I managed a Prelude and Fugue, and people didn’t seem to mind. I could have used a third hand to turn pages and keep the music in place. There is a limit to what clothes pins can do.
On Wednesday, I made a good find: the piano at Alice Tully Hall. It stands on a little terrace by the entrance, below street level, and the stairs that surround it create an intimate space. 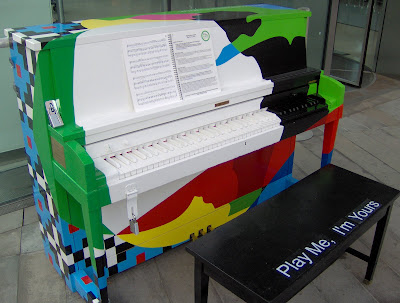 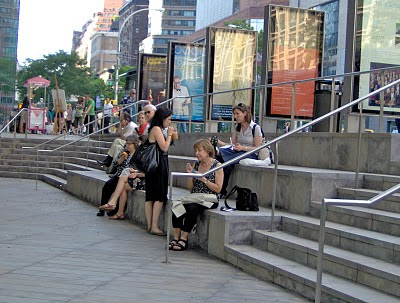 The traffic noise coming from Broadway was floating over our heads. It took more courage than I expected to just sit down and play.
The traffic noise did a strange thing: I had to focus so hard to hear myself that it brought me back to myself. In the middle of all the noise, the piano and I became a unit making a different kind of sound.
Even though the sound did not carry very far, I like to think that it made a difference, just being there, adding a faint overtone of harmony to the symphony of the city: the traffic noise, the rumble of the subway, the people rushing, talking on the phone all the time, their minds at their point of destination before their bodies can take them there.
The pianos are a chance to pause for a moment and reconnect.
They invite some to stay and listen, others to sit down and play, whatever comes to their mind - a glissando in passing, an improvisation, a medley from the last audition at the Juilliard School, the beginning of a piece learnt at a piano lesson long ago. 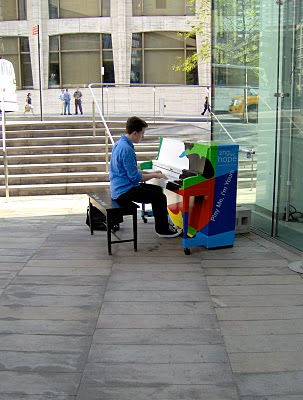 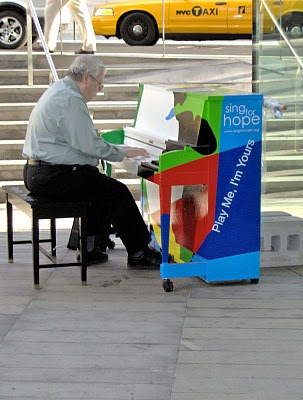 Chopin, Nocturne in C-sharp minor
Choir is out for the summer, but my inner alarm clock still gets me up in time for the 7:30 bus into the city on Sunday morning. Unless it’s pouring this Sunday, I’ll take my music, go to the city and see what I can add to the concert.
Posted by BM at 10:12 AM 1 comment:

How long does it take to learn a piece?

Yesterday, I had a long conversation with one of my students, who is a graduating senior. In fall, he will go to college to study music education.
He discovered music comparatively late, and much of his piano playing is self taught. He has great ears, and through immense commitment and many hours at the piano, he got his fingers to reproduce the music - the melodies, the harmonies. He is fascinated by Glenn Gould, and he likes to play fast.
His deficiencies in reading music have been a grievance to him and to his teachers. Being a good reader does not automatically open the ear and the heart for the music, but for a poor reader, it is difficult to find the subtle messages composers convey in the score.
My student is working hard to catch up. Most of all, he hopes that improving his reading will make him learn faster. “There is all this great music I want to play, and I want to be really good,” he said, “It takes me so long to learn something.”
How long does it take to explore and to own a work of great art? We talked about that. You can read a play by Shakespeare, a novel by Tolstoi in a couple of weeks, but trying to “understand” their true meaning is a task for a lifetime. It is the same in music, where the truth is communicated through the way you play.
Decoding a musical score requires meticulous attention to the details and endless patience, looking for ways to produce the sound you hear in your mind. You need to absorb yourself in the work to a point where “real time” disappears.
The process of exploring the work sets the pace, and that’s the only thing that counts. As you return to the piece at different times of your life, you’re bound to find something that you didn’t notice before. You never come to an end, and that’s the beauty of it.
At this point of his life, it is difficult for my student to imagine that he might work on a piece for a year. Despite the demands of a curriculum, I hope he will have the chance to explore his own pace of learning in college.  He was open to the idea of growing from a musical athlete into a musical artist - a performer who becomes a medium for the truth conveyed through works of great art.
Posted by BM at 9:11 AM 1 comment: