When I left New Hampshire, one of my students gave me a small clock, the case made of wood, resembling the shape of the state, the clock itself no larger than a watch. It stands on the windowsill by my desk, and has become the time keeper of my work. I like it, because it is silent and small, not overly intrusive, but present for a quick glance when I teach or practice. I’m always concerned whether there is enough time left to do everything that needs to be done. 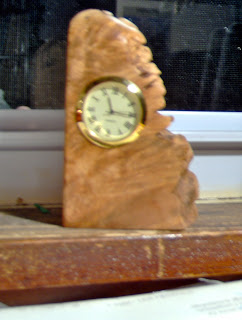 The other day I came home and found that the clock had stopped, probably in need of a new battery.
There was no need to do anything about it during the vacation week. I got used to it and I almost liked it better that way:
In fact, it’s one of the greatest luxuries I can imagine. Tomorrow, I start teaching again. I wasn’t too disappointed when I found the store already closed where I wanted to get the battery changed today. It will make it easier to preserve some of that feeling of letting time pass without measuring it.
Posted by BM at 11:18 PM 2 comments:

There has to be music at every lesson

“The students are coming for a musical experience. There has to be music at every lesson.” I don’t remember who made the statement during the two hours of lively discussion at the Leschetizky Association’s Teachers’ Forum last Saturday, but it went home with me.
It’s so obvious that it seems hardly worth mentioning. In real life, things can easily go the other way. A situation comes to mind from a lesson last week: The student came in, beaming with joy, reporting with pride that she managed to learn the entire piece hands together.
My inner response was a mixture of thrill and worry, which I found confirmed in the child’s playing. The part of the piece she was particularly proud of was also particularly fast and breathless, possibly reflecting her inner excitement at having accomplished this task. In addition to the pace, the phrasing had gotten lost, so had the articulation and the dynamics. We had worked on these aspects at the previous lesson, and I thought I had taken care to have her hear and feel the difference in the way the piece sounded.
And then, I imagine, she started to practice, got all excited over hands together, and her enthusiasm swept away the phrasing and the articulation and the dynamics like a storm.
I’ve been there myself, even as an adult student. Just recently, I learnt Liszt’s Consolation No 3. It didn’t seem too difficult, and in practicing I was pleased with myself. I had a good time, indulged in the beautiful sounds and only realized at my lesson that I had never taken the trouble to exactly figure out the mixed rhythms...
My teacher took it calmly, we laughed it off, and with a smile he promised he wouldn’t tell anyone. I was just a little embarrassed and vowed to myself I would observe the score more diligently the next time. As an adult, you can to see to it yourself that the child in you doesn’t get hurt.
With young students, it’s different. No matter how hard you try as a teacher, occasional casualties seem almost inevitable. Most of the time, the students don’t hear the music the way you do. You hear nuances they can’t even imagine. They rely on you to improve their playing and gradually perceive those subtle differences themselves.
Sometimes, it’s the most gifted and the most hard working students that pose the greatest challenge. A student plays beautifully, and I’m still commenting on a tiny little thing that could be improved. Even though I take great care to praise her for her playing, my suggestion for improvement comes across as criticism. She is too young to understand that my criticism is a compliment, that I’m asking a lot, because I know she can do it.
Explaining is fruitless, for her, I’m just a nagging old woman at that moment. If I don’t sense the moment when it’s time to stop nagging, and if I don’t find an appropriate way to bring my suggestions across, there’s a chance that the music, as the student feels it, will get smothered, chopped up into items on an endless list: fingerings and timing and motions and hand position and pedal and dynamics...
If that’s happening, sometimes, it’s time to let go, and wait for a better moment, or a different piece to add on what is still missing. It’s the feeling for the music that fuels the learning process. There has to be music at every lesson.
Posted by BM at 6:47 PM No comments:

After three weekends of student performances, peace of mind finally returns. I have nights of restful sleep. I’m not sure what makes me more nervous: performing myself, or working with students towards a performance, and listening to them play.
They have to do the work, of course, the practicing, but I always feel I’m in there with it. Have I chosen the right pieces?  If students don’t practice, in spite of the recital coming up, how can I motivate them to do it? Young people have a different sense of time passing. How much can you fit into your day, and how secure do you have to be in order to survive a performance? Teenagers tend to chronically over schedule themselves, and young children often have no sense of time at all. Sometimes, I envy them for their talent of “being in the moment.”
The only way to learn how to prepare for a recital and how to perform successfully is to experiment. If you fall flat on your face, that tells you you need to do something different the next time. Getting over the disappointment gives you an opportunity to train a life skill. Occasionally, you learn more from a bad performance than from a good one. Regardless of that, I don’t like disappointments or people falling apart on stage, and I try everything to make performance a positive experience, for myself and for my students as well. Maybe, I’m a little over protective. 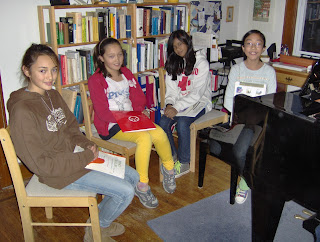 Celeste, Hanna, Mita and Athy at performance class
Everybody was in good shape at the performance class a week before the recital. We have a performance class every month. It gives students a chance to gather experience playing for others, and listening to others. It also means sharing the work, realizing that it’s a process and no one simply goes out there and does a perfect job. 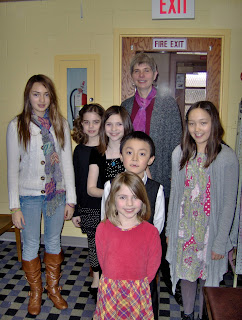 Group photo at the library,
with Celeste, Zoe, Louise, Kenny, Olive and Hanna (left to right)
“I hope they didn’t peak early,” I thought after the class. They didn’t, the playing held up at the recital which we held at the South Orange Public Library on January 29th. Most important, everybody made music, nobody played “just the notes.”  The last piece on the program was a little round we used to sing in Germany when I was a child: “Froh zu sein bedarf es wenig” - “It takes little to be happy, if you’re happy you’ re a king.”

Louise, Kenny and Zoe had played it three times in the course of the program, giving the audience a chance to learn it. Before everybody went home, we played it in 4 parts, and the audience sang along. 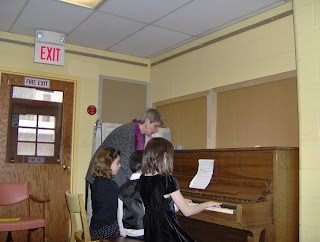 "It takes little to be happy" in four parts
A week after the studio recital, Kenny and Athy had yet another event coming up: they performed at a student recital organized by the Leschetizky Association at Montclair State University.
Playing in a public recital like that is a big step. It means leaving the familiar environment of the studio and “swimming in a larger pond.” Students come from different backgrounds, and you are bound to meet people who are your age and they play pieces that are much more difficult. 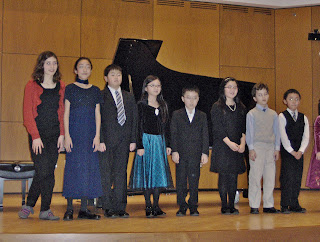 Athy (2nd on left) and Kenny (last on right) and other performers in the recital of the Leschetizky Association
We had talked about this - about the fact that different people start to play at different ages, some work harder than others, and some simply progress faster than others. It’s a fact of life that you encounter in other areas as well, and it doesn’t have to be defeating - on the contrary, it can be inspiring. The most important thing is that you do whatever you do as best as you can. They both did, and they enjoyed playing on the beautiful new concert grand the school acquired a year ago.
When it was all over, I made a mental note to myself that we have to pay more attention to “stage presence” at performing class again. Usually, everybody plays and bows afterwards, but this time, we got so involved in discussing the playing that it fell through - and of course, everyone just ran off after they played their piece at the recital. Also, I might start to print out the programs - so that the students learn what you can do with them other than folding paper airplanes... 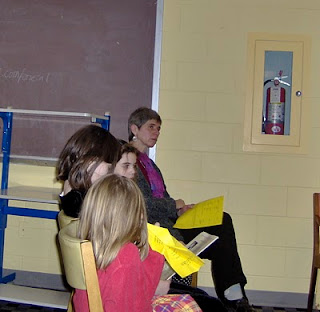