Last Bus from the City

The weather forecast was grim last Wednesday. Nevertheless, I decided to go to the city to teach. Snowstorms seem to have developed a preference for Wednesdays lately. Two weeks ago, I had cancelled because of the weather, then, students had to cancel because they were sick. If you cancel all too often, you lose momentum.
New Jersey already had a considerable amount of snow in the morning, and a travel alert announced 20-30 minute delays. I got on the bus - an hour earlier than usual - and of course, we got to New York on time. We even had a glimpse of the sun, before the bus disappeared in the tunnel.
New York had more slush than snow, and late in the afternoon, it stopped snowing altogether. “That was it,” I thought, not for the first time wondering what the people in charge of the weather forecast are being paid for. On the way to my last student, light snow started up again, and there were occasional gusts of wind.
“It’s supposed to get really bad after nine,” she said, before I left her place just around that time. Outside, a thin layer of snow was covering the sidewalk. Big, fluffy snowflakes were falling from the sky, and I enjoyed my walk from Chelsea back to Port Authority through the wintry city.
No signs of foreboding at the bus station - except for a snowplow, which is an unusual sight inside the terminal. The bus was a little late, but that happens. On the way down the ramp, the snow was falling heavily.
I took out my book and began to read. My habitual last glimpse at the the city from the other side of the river was cancelled by the weather. “Oh well,” I thought, getting back to my book as we slowly progressed.
A few passengers were having a passionate discussion about the most recent game of the Jets. At first, I thought the bus driver was involved in it, too. I looked up again and found it reassuring that he wasn’t, wondering how on earth he managed to keep the bus on the road. We were just going through the curvy exit towards Newark, rather fast, for my taste. The visibility was close to zero, occasionally, the wind was shaking the bus, and the road was starting to feel bumpy.
Memories caught up with me, of an 8-hour bus trip from New York to Boston, creeping along the highway in a snow storm. That was during my first year in New Hampshire. The last bus to Concord was cancelled, I knew no one in Boston and had to find accommodation in the middle of the night.
Spending the night in a bus in the snow storm in the middle of the wetlands between New York and Newark wasn’t such a compelling perspective, either. At least, I wasn’t in a car by myself, and I had a book. It’s never felt so good to reach Newark, the lights flickering dimly through the snow.
Still grateful for the book, my mind began to go through the last stations of the trip. There’s that insane "hairpin" turn when you get off the highway in Irvington, and a couple of more narrow curves on the way to Springfield Avenue. Who knows what’s going on there. Irvington Bus Terminal - home is about 2 miles from there, and you could walk, if you had to - under normal circumstances.
We passed the terminal and got onto Irvington Avenue. We passed a couple of cars that were stuck on the side of the road. “Hey you, from the back of the bus, come up here, please,” the bus driver called out to one of the passengers. He told him that he couldn’t let him off at his usual bus stop - so where should he let him off instead?
Shortly after that, a car was blocking the street. With determination, the bus driver turned into the next side street, and off we went. I could probably walk home from Irvington Bus Terminal even in a snow storm, but now I had no clue where we were, let alone where we were going.
Another woman appeared a little worried, too. Together, we went up to the bus driver. “Don’t worry, ladies, I know what I’m doing,” he said. It’s amazing how those bus drivers always know where everyone gets off. “This is probably going to be the last bus?” the woman said. The bus driver didn’t answer, but you could tell that he was eager to get back to South Orange before everything closed down completely.
Shortly afterwards, he took another turn that led us back to the usual bus route. I’ve never been so relieved to see Irvington Avenue again, and get off at my usual bus stop. I’ve never been so relieved to turn the key to my apartment, after wading home through the snow that was knee deep by then. 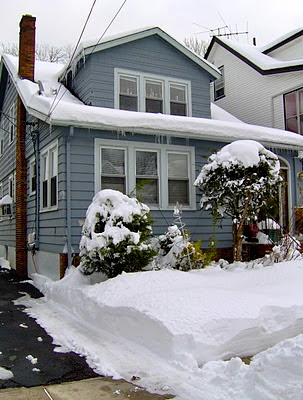 Farewell to a Favorite Place

On my first visit to New York City in 1996, I could hardly believe what I saw on entering the bookstore at the corner of Broadway and Columbus Avenue, right across the street from Lincoln Center. Open from 9 am to midnight, 7 days a week! That beat any library hours, and the supplies - books from the basement to the 3rd floor - appeared compatible as well.
Many people seemed to be using the store in the sense of a reference library. Some were sitting on the carpet right between the shelves, deeply absorbed in the books they had taken. A whole line of readers were sitting on the floor, comfortably leaning against the wall while taking notes. It was even hard to find a place.
If you had tried the same thing in Germany at the time, a shop assistant would have been after you before you got around to turning a page, with instructions that the books were for purchase only, and if you intended to do anything with them beyond that, would you move on to the cash register, please.
The cafe on the fourth floor was the best. Overlooking Broadway from above, you could sit there for hours over a bite to eat or something to drink and a stack of books. The portraits of great writers on the back wall of the cafe conjured up their spirits; in short, it was a reader’s heaven. 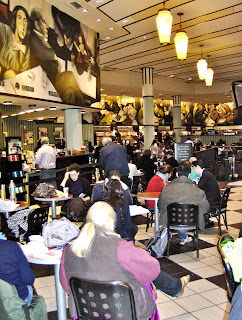 In 1997, I began to study piano with Seymour Bernstein. On numerous trips to New York City, from Germany at first, then from New Hampshire, the bookstore became a sort of “soul home” in the city, a place that anchored me, while I stayed overnight in different places; or before I headed out for another long trip on the plane or on the bus. Even after I moved to New Jersey, I kept up the habit of spending time over a cup of tea and a stack of books at the cafe after my piano lesson, and at other times as well.
In December 2010, a simple notice on plain white paper informed customers that the book store would be closing at the end of the year. For a couple of days, I felt homeless.
The other day, I found the following message posted on the door:
“This location of Barnes&Noble has closed. Yes, it was just a store. But for us, the people who filled this store, it has been our honor and pleasure to serve this community for the past fifteen years. Some of you we’ve known all that time, others only briefly. But we’ve valued our relationships with all of you.
Thank you for allowing us into your lives, and into your community.
We will miss you.”
It’s a small comfort that I’m not the only one who has to find a new routine. Others have lost their workplace - compared to that, my loss is minor. I didn’t know that I had been a regular visitor ( and an occasional customer) from the beginning to the end.
There is a special energy in places where people come together randomly to do the same thing, even if they do it by themselves. It’s a part of city culture, and it’s a part of its magic - of the parks in the summer, and the "public spaces" in the winter. The bookstore was one of them. New York City has lost one of its magical places.
Posted by BM at 7:26 PM 1 comment: