When I went to South Orange this morning to put my Christmas Cards in the mail, the pole of the big clock in the center of town caught my attention. It looked different than usually. Something was wrapped around it, looking a little messy from a distance. 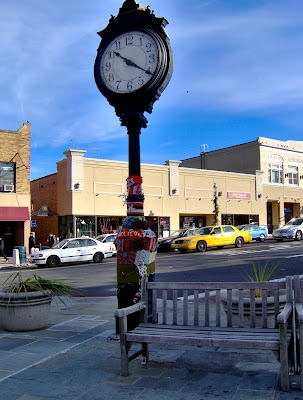 Coming closer, I found one of the most heartwarming Christmas decorations I’ve ever seen: hand made woolen scarves and items, samples with good wishes, as if to warm the cast iron pole ... and maybe time itself? 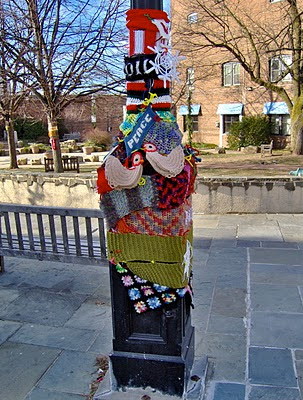 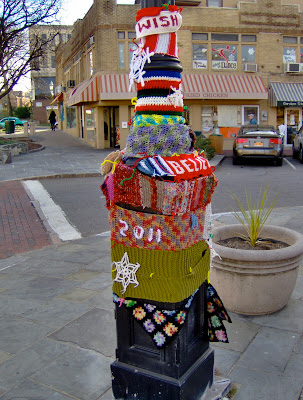 May you all find something
to warm your heart this Christmas. 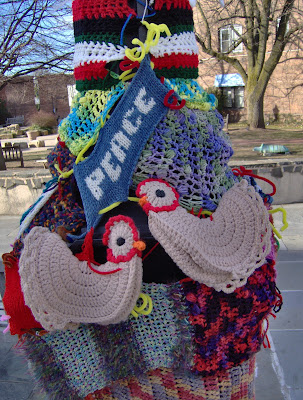 As far as performing is concerned, I was ready to wind down for the year after the recital in Concord. Eagerly, I plunged into new repertoire. A call from our choir director on the last day of November provided me with an unexpected “encore”.
The choir had been hired to sing several movements of the Durufle Requiem at a memorial service that was to take place in Alice Tully Hall in New York City a week later. Since a video was going to be shown at the service, the organ had to disappear behind a large screen and could not be used.
Now, the choir would sing “At the River” by Copland, and “O beautiful for spacious skies” together with the audience. An accompanist was needed, who was also to play a SHORT Prelude and a SHORT Postlude on the piano.
I agreed to do the job, rescheduled my students, cancelled everything I didn’t absolutely have to do, put Chopin’s F-major Ballade back on the shelf and spent hours every day reviving two selections from Bach’s Well-Tempered Clavier. We thought they were a good choice for the solemn occasion. They take less than 10 minutes to perform, but every little detail in articulation and voicing makes a difference, and every mishap sticks out like a sore thumb. 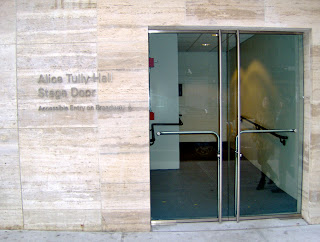 On the day of the event, I arrived early to ensure that I would get a chance to try out the piano. The concert grand stood huddled in the back corner of the stage. At first I didn’t even notice that it was positioned the wrong way, the bass facing the audience,”so that I could see the choir director”, one of the stage managers explained.
A small reading light had been positioned on the music stand. It barely illuminated the entire score, and the keyboard disappeared in the shadows. “This is an event, not a concert,” was the reply to our request for more light. During rehearsal with the choir, the reading light went out altogether. Even though I was assured this was not going to happen again, I asked my page turner to, please, find a flashlight, just in case. 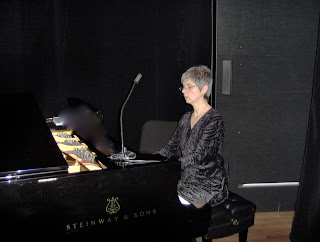 Apparently, there had been some miscommunication, regarding the length of the program. Could I play for half an hour, was the question, so that there would be some music while people were walking in and out ? It’s possible that someone even said no one would be listening - a feeble attempt to boost my confidence ?
An hour before the beginning of the service, I found that the Preludes and Fugues I had performed in Concord 2 weeks earlier were still in good shape. I practiced and timed the pieces. A student from the Juilliard School would be hired to fill in the rest. “Why are you doing this in the first place”, a tiny voice asked in the back of my mind. Well, I guess there’s nothing like a challenge...
Pleasant Jazz Tunes wavered through the hall as it began to fill with people. After 20 minutes, our choir director shooed the pianist off stage, so I could strike up a more serious tone with Bach.
There’s nothing wrong with putting your concentration to the test. If you can keep your mind on the Fugue in g-sharp minor from Book II of the Well-Tempered Clavier while people are engaged in a conversation a few feet away from you, it speaks for the quality of your preparation. 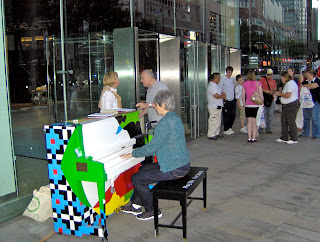 Performing on the street pianos at Lincoln Center in the summer had been a good preparation for this task. The major differences between the occasions were the concert grand I got to play this time, and the pay check. Regardless of that, there was something about the street pianos and their off colored, sticking, sticky keys, and the sounds of the music mixing with the random sounds of the city that felt more honest and authentic.
The ways in which music can touch people’s hearts are mysterious and often a matter of chance. Someone came back stage and thanked us afterwards. Beyond conventions and representation, this had been a memorial service, and at least music was given a chance to bring comfort to those who were grieving the loss of someone they loved.
Posted by BM at 9:48 AM 1 comment: